Tv series are another part of my daily routine. 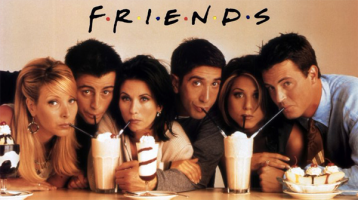 I’ve watched, and still watch, many tv series, the first one being Friends.

Friends is special because it has been with me in the saddest moments of my life so far, giving me and idea of what true friendship really means. My favorite character is Monica: she’s competitive, perfectionist and almost obsessed with hygiene. I also like Chandler and the love story between him and Monica that starts in the fifth season.

Nowadays, I follow slightly different kinds of series, mainly Once Upon a Time and Outlander. I also watch series like Flash, Arrow and Gotham with my lovely boyfriend Henry.

The first two I wrote are special to me, because they have everything: action, romance, and also a little bit of comedy. In Once, there are Snow White and Prince Charming, the couple who represents the kind of love found in fairy tales. In Outlander, love is represented in a different way: it’s more realistic, sometimes it gives suffering, but it is still unique and special in its own way.

But my absolute number one tv series has always been, and probably will always be, Reign!

The main reason is the lead actress, Adelaide Kane. Ever since the first season, she has impressed me with her beauty and grace, coupled with how well she performed her role of Mary, Queen of Scots. Another thing that impressed me really much is the love story between Mary and Francis. Sometimes full of romanticism, some times heartbreaking, but never trivial. And of course, don’t forget the costumes, made by Meredith Markworth.

I hope you’ll like this blog, let me know your impressions,